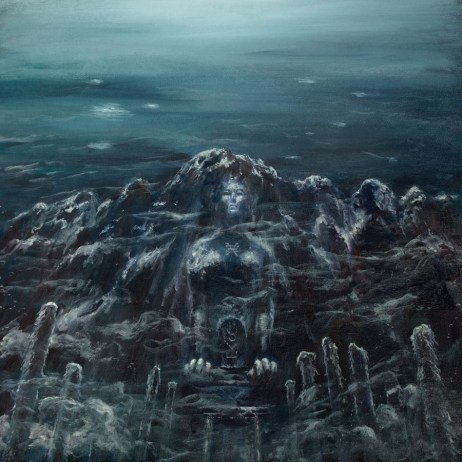 Serpent Noir started off pretty high with their chaotic black metal sound on their debut full-length ‘Seeing through the Shadow Consciousness (Open up the Shells)’ which was released back in 2012. Their debut album represented an orthodox sound with lyrical concepts based on occultism; which a lot of bands are doing nowadays. What makes Serpent Noir special is their sense of transforming music into an art, their recently released second full-length ‘Erotomysticism’ is off no difference to this statement. END_OF_DOCUMENT_TOKEN_TO_BE_REPLACED

Devouring Star is a black/death metal band hailing from Finland. Not much of information has been revealed about the quartet, as the members keep their identity secret. Their debut effort, ‘Through Lung and Heart’ was released last month on various formats through Daemon Worship Productions. What makes Devouring Star unique is their complex approach on the music, dragging influences from ambient, black, death and doom metal to generate a sound of their own.

‘Through Lung and Heart’ is very dark, heavy and crushing at the same time. The album kicks off with a 2 minute long ambient intro before surging into chaotic black/death metal for the rest 35 minutes. Devouring Star carefully managed to distinguish themselves from being labeled as an Archgoat or Barathrum styled band by varying the tone depth and tempos. The band solely relied on heavy riffing to induce that hellish vibe in their music, echoing a 90’s death/doom atmosphere throughout. The often tremolo picked rhythms add black metal flavor to it, backed by powerful drumming and bass distortions. Devouring Star put all of their efforts to maintain the originality of their sound and showcased their musicianship on the opening track ‘Sanctified Decomposition‘, so if you are spinning the disc, you will know what is awaiting on the next four tracks. The use of synths is limited to ambient sections on the tracks ‘Sanctified Decomposition’ and ‘Through Lung and Heart’. ‘Decayed Son of Earth’ and ‘To Traverse the Black Flame’ have some slow paced sections reminiscent of Svartidauði. Again, the next track ‘The Dreaming Tombs’ pulls in the faster black metal mayhem. Therefore, the music never gets predictive but to grasp you amidst the trench of devouring black holes.

The vocals on this album is terrific, the howling singings and the trembling grunts will shiver your spine. Despite the good production, ‘Through Lung and Heart’ never loses the appeal. This is where Devouring Star stands out. They didn’t just rely on poor mastering and productions deteriorating the sound but brought in their innovativeness to procreate a genuine black metal stance for themselves.

Not sure if others would agree or not, I will personally recognize ‘Through Lung and Heart’ as one of the most comprehensive and exciting releases of the year 2015. Devouring Star just showed their potentials by placing a landmark black/death metal album. Strongly recommended.

Recommendation: Sanctified Decomposition, The Dreaming Tombs, Through Lung and Heart.

Stream and Order at:

Chalice of Blood, a band locating from Sweden has marked almost a decade of their existence. Not known to many black metal enthusiasts, moreover the band members also disguise their identities to public; however, the band has not released anything remarkable yet. The band has only a demo released back in 2005, which has been followed by several split releases. Chalice of Blood has an EP on pipeline, entitled Helig, Helig, Helig, which is to be released on Daemon Worship Production.

The EP starts off with a melodic tremolo riff, followed by harmonized guitar notes on an intro titled as Hoor-Paar-Kraat. The intro certainly sets the mood for a chaotic black metal experience as Nightside Serpent breaks in. The guitar tones are sharp, tremolo picked and even there are breakdowns and clean guitars. The clean guitar sections are particularly pretty well timed and also mixed brightly (Transcend the Endless for example). The best part about the guitars are they actually pull on a good, solid background for a black metal release. The rhythm section is not pretty noteworthy, but some riffs are really good and well executed (Shemot and Transcend the Endless). The bass guitars are although buried under guitar tones, but they do make the sound and atmosphere heavy. The distorted bass lines could be heard properly as the guitar breaks down (Shemot, The Communicants). The drums are straightforward, typical blasts yet there are some long, nicely composed fills. The vocal does some great deliveries throughout. There’s not much variation on vocal style, the singer keeps shrieking on lyrics passionately. The vocals are a bit low in the mix, giving more place for the music to fit in. The mixing is done pretty well, with a strong production without hurting the atmosphere, resulting in a solid sound.

Now about the demerits of the album. Reinstated that, the album is pretty solid in sound. But there is certainly a lack of originality. There’s nothing exceptional the listener can expect but mid paced black metal, which is obviously an evidential orthodox release. Another down point I can state about is, the band somewhat slipped to execute the ideas they planned. For example, the track The Communicants has some redundant moments in it. However, that’s acceptable for the good melodies the band has provided afterwards.

To finish with, Helig, Helig, Helig is overall an admirable record with a solid sound, but lacks the originality somewhat. However, this EP can be claimed as a good start for Chalice Of Blood’s upcoming journey. The EP is recommended for the fans of bands like Watain, Ofermod, Nefandus or more elaborately, fans of Swedish black metal.

The band chose to remain unknown. 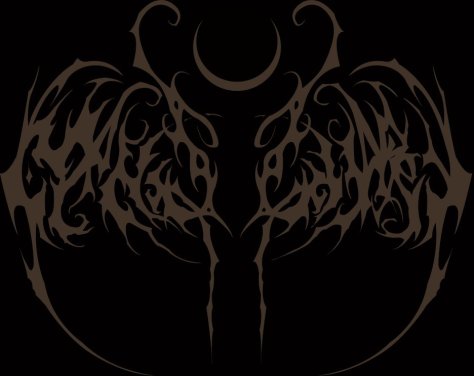 Fourth full length of Nightbringer, Ego Dominus Tuus is one of the most anticipated album among the enthusiasts of the black metal music. The album is set to be released on the final day of September, 2014. Three spectacular tracks from the album have already been premiered and undeniably these revered creations have necessitated a wistful longing among the listeners to experience the taste of the full length. It goes without saying that the crafts that Nightbringer make transparent through their wondrous music are not a dime a dozen.  The esoteric and occult essence that are reflected from Nightbringer’s music simply deserve admiration.  The band flawlessly holds a combination of eccentric sound and expansive spiritual based lyrical theme that can be regarded as an aestheticism in black metal music.

New full length is probably going to be a watershed of the modern occult oriented black metal movement. We have had in details conversation with the founder of the band, Naas Alcameth where he has opened a lot of words about the new release and more about Nightbringer and his other projects.

N.A.: The concept is based on a cipher of a certain sacred name, in which is veiled a hierarchical formula consisting of three parts which represent three phases upon the path of the Great Work when approached from the infernal road. Without saying too much on the topic I can say that the concept of ordeal is central to the path of which we are relaying. To reiterate what has been previously said regarding all of this, it represents the path of ordeal, from the transformative Fires of the Art within the crucible of the underworld, to the revelation of the Daimon to the Guardian at the Threshold and slaying the Sun of Death, Light of Lucifer. The allegory is sacred and has no direct bearing on any of the mundane aspects of the album’s creation. It is meant to reflect a spiritual process and the greatest spiritual aspirations. The writing and recording process was approximately one year in duration from start to finish. The songs were written independently by the respective core members with concept and overall shared vision kept in mind of course. We approached all of this in a very exhaustive and meticulous manner, more so than ever before and we believe the final result greatly reflects this.

N.A.: The title was indeed inspired by Yeats poem, specifically his concept of the daimon. Outside of this specific element of inspiration the lyrics are specific to the album concept mentioned above and not inspired from Yeats outside of this conception of one’s daimon.

N.A.: Indeed it does. The lyrics are influenced from this psalm, which I felt, via a heretical approach, evokes such symbols as the ‘midnightsun’ and the ‘night of light’, symbols important to our work. The lyrics also touch upon the Greek ‘melancholia’ and the sovereignty of Saturn over those of us who are born with his mark and our relation to the former concepts. It relays the idea of ecstatic furorth at it is said one may enter in order to obtain wisdom, which is imparted both from ‘above’, ‘below’ and ‘within’, via a state of ‘divine madness’, the inspiration felt at the heights of an ecstatic state. As for mans amazement towards God, this would also be correct but in this track specifically the amazement is towards a specific aspect or face of God (God as understood as the Absolute as it is used in a Platonic/Orphic tradition), which in one instance may be expressed as Saturn and another as Satan. Regarding the interpretation of the ‘extermination of non-believers’ from the lines within the psalm, from this approach and personal interpretation, theselines serve to express our utterest rangement from those who are diametrically and fundamentally our spiritual opposites, and ultimately the irrevocable schism of those who would strive to truly be awakened, truly alive and those who are, unbeknownst to them, irredeemably dead. Inevitably we all will be ‘as food for the gods’, we are all slain unless we learn to be otherwise.

N.A.: The album cover directly depicts the hierarchical triad, the enigma of the sacred name and path spoken of above.

N.A.: Actually it really has not been a problem. The core members essential to the music composing and recording all reside here in Colorado, minus our drummer Menthor who is able to efficiently record his tracks from afar with some back and forth discussions and simple revisions. It has all worked out very well. 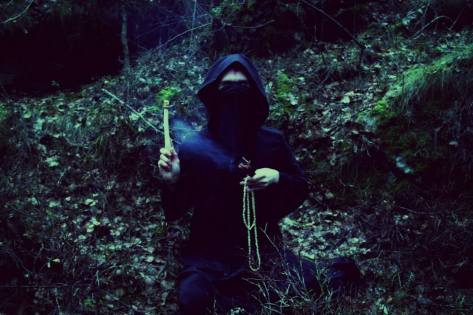 N.A.: It was not so difficult as both bands share at least some commonality in regards to spiritual philosophies. There was plenty of discussion between both entities before and during the composition process as to what the unified visions would be. Although our outlook towards spirituality is not identical to either of these great acts there was enough common ground to build a solid and unified conception.

N.A.: At this time I have no plans to do such a thing but perhaps in the future. It is hard to say.

N.A.: Excommunion has been resurrected for another album although there will be much departure from what it was when I was a youth. This will be out sometime next year via Dark Descent. There are no immediate plans for ToN but some things are coming together slowly for an Akhlys release, but this may still be a ways off.

N.A.: I am uncertain if the individual behind it will do another one or not truthfully. We would love to participate again if it does come to pass.

N.A.: That is unlikely however we do plan to return to European soil next year. As far as other parts of the globe, it is certainly being considered.

N.A.: I will let the daimon speak for itself.  – Pete solem in domo Erebi.-