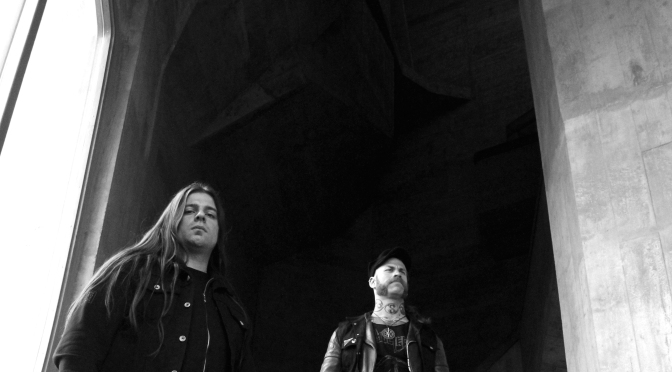 I can think of few bands that have generated quite such excitement in recent years as Bölzer. Formed in 2008, the Zurich based duo is set to unleash their highly anticipated début album “HERO” on November 25th.

With the demo “Roman Acupuncture” and the extremely well received EPs “Aura” and “Soma”, Bölzer have already amassed a loyal and ever growing fan base and have supported Black Metal titans Watain and Behemoth.

If pressure was a factor in the birthing of this monolith of sound it most definitely doesn’t show as “HERO” is the most coherent and focused thing Bölzer have committed to tape yet.

Intro “Urdr” is comprised of little more than a sparse drum beat and a whistled melody but does more than enough to build anticipation for what is to come.

But it is “The Archer” where “HERO” truly begins.

Resounding and violent “The Archer” is enhanced by clean, dare I say operatic, bellows which breathe new life into Bölzer’s already mammoth sound.

Title track “Hero” is built around monstrous riffs and a chorus, again consisting of clean vocals, that speaks of fire and thunder and along with “The Archer” is the one of the album’s many highlights.

Up next we have “Phosphor” Almost 8 minutes of sheer, unrelenting aggression which surprisingly morphs and fades into a brief and haunting ambience.

Carried by a simple chant the brief “Decima” acts a prelude to “I AM III”. A fast (at times) but mostly mid tempo composition, “I AM III”  acts as the album’s centrepiece and will no doubt ascend to even greater heights when performed live. Unfortunately “I AM III” (stream below) has proven itself to be rather divisive among fans, with some being unable to appreciate the grandeur of this 9 and a half minute epic.

“Spiritual Athleticism” opens with one of the catchiest riffs on the entire album. Reminiscent of “Entranced by The Wolfshook” here, once again, Bölzer rely on sheer aggression and barring a slowing of tempo mid song, this could be viewed as a companion to the earlier “Phosphor”.

“Chlorophyllia” the album’s final metal track is a driving and thoroughly enjoyable affair with calls for us to “Leave this world behind“ and features an uplifting vocal performance by KzR which showcases the diversity of his range and segues beautifully into “Atropos” with the album drawing to a close with the stirring cries of “See You on the Other Side”.

“HERO” is a brave step in a new and exciting direction but with an eye firmly fixed on what has made Bölzer the powerhouse they are today, and with it, they are set to take their rightful place among the heavyweights of the genre.

One thought on “Fire,Thunder and the “Hero”, Bölzer break new ground on stunning full length debut”