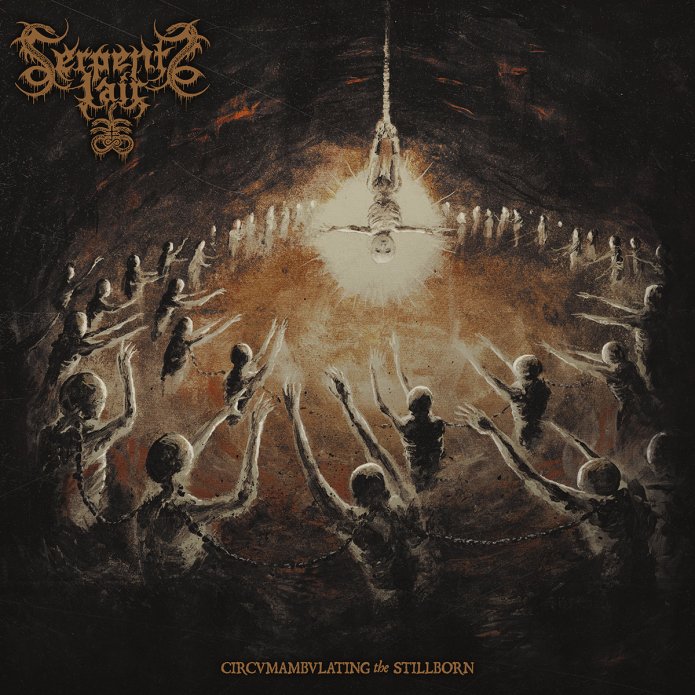 Danes Black Metal force Serpents Lair has recently released their debut full length titled ‘Circumambulating the Stillborn’. The album got released in digital format in November independently. It has also been released in vinyl format from Fallen Empire Records/ Duplicate Records on December 2015 and in CD format from Hellthrasher Productions on January 2016. Forming in 2013, earlier the band had a demo out. They have also appeared in a mix-tape (along with six other bands) which got released through Fallen Empire Records. The compilation was available only at Maryland Deathfest 2014).

‘Circumambulating the Stillborn’ consists of 7 tracks including an intro with a total duration of 43 minutes 35 seconds. After listening the album for quite a few times what I felt is at some point this record is kind of overdone. What I mean by overdone is some numbers are unnecessarily lengthy; it felt in some numbers the band tried to impose some Nidrosian Black Metal essence forcefully. The music is not alive. It failed to give me the punch I was expecting from the record. I could not found anything much significant. It did sound very monotonous to me. Well, yes, monotony is something that we might find in many Black Metal record. As a matter of fact that is what sometimes creates the beauty of Black Metal. You will find monotony in classic Burzum records like ‘Filosofem’, but that monotony creates an addiction. A trance. On the other hand, if you can’t bring out the beauty of it, monotony is just another synonym of boring. Talking about the production, it was not good enough. A better mixing and mastering could have made a significant difference. To my ear, it just did not quite sync. Like the drums and the guitar kind of sounded like being played in two different ambiances. The bass was almost absent. If I were the bassist of this band I would have been quitting after this production. Damn, that was just injustice to that poor guy!

Let’s come to some pros. Well, the vocal was good. But yes, it could get a little louder (again injustice)! Some riffs and melody lines in tracks like ‘Mortui Vivos Docent’ or ‘The Serpentine Gnosis’ were brilliant. And the lyric! I have to appreciate their words. The words were dark, brutal and poetic at the same time. The album art also did some justice.

Overall to me ‘Circumambulating the Stillborn’ did sound kind of average. Then again, you can always give a listen if you are a fan of Nidrosian Black Metal. Expecting better from Serpents Liar in future.

You can stream the album from following link: