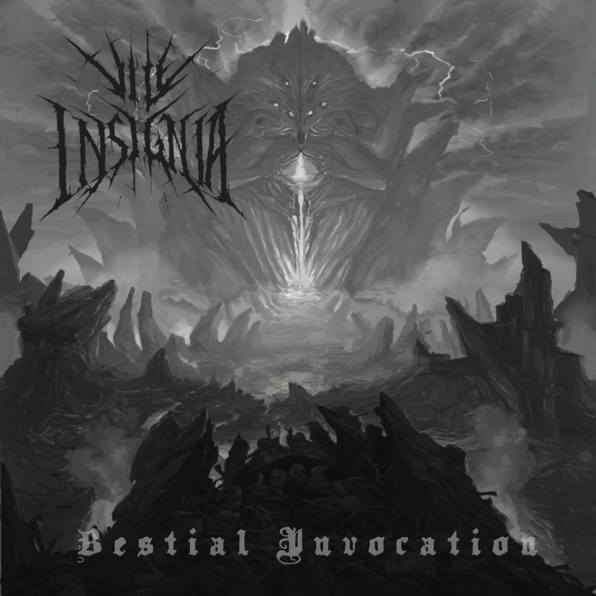 Vile Insignia is a black/death metal group from Calgary, Alberta, Canada. I was aware of this band as I did a review for their debut self-titled EP. What made me an admirer of the band is their quality brand of black metal fused with a technical death metal sound. Vile Insignia’s music is abhorrent, filthy and aggressively hammering. I enjoyed every bit of their debut EP and was in a wait to hear more from the band. Vile Insignia released their debut full-length entitled ‘Bestial Invocation’ on October 2nd, 2015 by themselves. The band did justice to their potentials and Bestial Invocation is an eminently matured release.

Vile Insignia’s self-titled debut EP was leaning more towards death metal, in terms of both composition and atmosphere, while ‘Bestial Invocation’ is an intriguing amalgam of the both. The first half of the album is black metal oriented and the latter half continues in the same direction as it was on their EP. If I am to bring some closest similarity then I’d mention of Zyklon’s Aeon, Belphegor’s Pestapcalypse VI or Malevolent Creation’s Doomsday X. The unrelenting sonic annihilation continues over an hour with 10 tracks. Elements can be heard from technical death metal as well, with all that assertive grooves blasting throughout. The guitars are exceptionally well composed once again with complex riff structures, savage rhythmic layout and oozing guitar shreds. Bass guitars have also given priority throughout, as they are equally intense. The drums are well synchronized with the complexity of composition, consolidating the coherence of all the instruments incorporated. If you are unfamiliar with this band, it’d be hard for you to believe ‘Bestial Invocation’ being their debut release. With songs like ‘Incarnation of Torment’, ‘Ritualistic Inquisition’ or ‘Desecration through Blasphemy’, the band hit their apex of creativity and exhibit what they are capable of. The ever changing riff patterns and the torrential blasts along with the shreds reinforce their musicianship among others trying to play in similar style. The supremacy of Vile Insignia’s chaotic black/death metal is cogently pointed out with all those guttural voices spitting hatred and blasphemy for an hour.

I am not going to comment whether Vile Insignia is underrated or not; the band has no lack of proficiency and sharp mindset to write such an adventurous album as ‘Bestial Invocation’. They are well concerned about their caliber and have no hesitance over unleashing their ‘barbarity’. Now you are recommended to check this release out and worship the morbid tales of bloodshed.

The entire album streaming is available on the following link