The Scandinavian black metal was in the center of attention in the 90’s due to the strong implementation of its satanic ideologies whereas the scenes in Central Europe gave themselves a strong hold on more darkened and epic approach of black metal. The bands like Summoning, Pazuzu explored fantasies and occult literature whereas bands like Abigor, Amestigon had kept their efforts based on Satanism and pagan heritage. The significant term Austrian Black Metal Syndicate to characterize these acts was also prominent for the time being. However, most of the black metal bands started to change their motivation around the first half of 2000s. Amestigon, that consists of members from Abigor, Summoning, Heidenreich released its earlier demos around that time and went into hibernation until 2010s Sun of All Suns. Their majestic and ritualistic approach on black metal has proved the diversity of Austrian black metal outside of what Summoning/Abigor was doing. After five years of break, Amestigon is again prepared with their second assault Thier.

Amestigon can be distinguished as the most avant-garde band to emerge from Austria, with dark, haunting melodic passage bridging on the mid paced black metal. The band slowed their pace even more on their latest effort Thier. The band relied more on slow, heavy riffing with a second guitar playing the rhythmic sections. The use of heavy synths to procreate the devilish atmosphere resulted tremendously. The background could be compared with Deathspell Omega’s masterpiece Paracletus or Hirilorns Legends of Evil and Eternal Death. 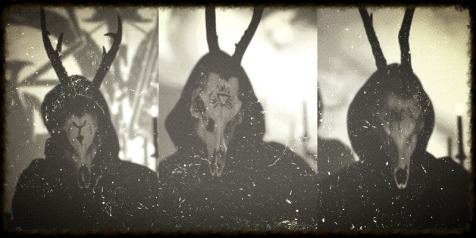 If you are familiar with Amestigons debut effort, then you might get Goosebumps as things got completely different here. The long 10 minutes+ composition (with the title track ticking to 20 minutes) might uncover the story. It’s obviously hard to keep the ideas alive throughout such daunting length, which Amestigon did pretty fairly.

Amestigon divided its musical manifesto into four different chapters: Demiurg, 358, Thier and Hochpolung. Although the lyrics have not been published yet, Amestigon brought forward the metaphysical contexts with the lyrics. All four chapters focus primarily on the dismal atmosphere, with the tempo coinciding with that of doom metal with sudden outbreak of horrid blackened parts. The sound on this record has got a strong production. Major emphasis are put on the guitar melodies and synths. Although synth is buried under, whilst the bass guitar kept high. The high pitched screeches from Silenius help the music sound almost surreal. Thier can be designated as the perfect harmony of phantasmagoria and music. The brilliance of this record can’t be apparent if you don’t explore it.

To end with, Amestigon reflected all their contemplation and efforts with Thier. This release justifies the diversity of black metal and has the perfection with concepts that Amestigon wanted to put forward. If you are reading this, you must check the release whether you are a fan of black metal or not.

Listen to Demiurg from Thier