After the mid 2000’s, a new era has been defined in the history of black metal. Some old names and newer one switched toward more modern ‘darker’ sound with occultism and esotericism based lyrics and ideologies. Netherlands, which may not be that much popular or known for procreating ‘good’ black metal bands, but some bands really stood out from growing Dutch black metal scenario. Sammath, formed in 1994 in Netherlands, is spreading spiteful hatred amongst the fans around the globe arrogantly through furious sound. The band has grown up to be considered fairly ‘big’ with their latest effort “Godless Arrogance”. We had a chance to talk with Jan Kruitwagen, the front-man and the sole member of Sammath since 1994, writing all the music itself. Throughout our conversation, Jan talked about the difficulties he faced with his band and also the ideologies he stands for. He also reveals the plan for making a tour next year and his future plans about Sammath.

Apocalyptic war hails Jan Kruitwagen!! Thanks for lending us some of your times brother. How things are going with you?

So, the band Sammath had released their 5th full length Godless Arrogance earlier this year. It was a stunner for me personally, how were the responses with the release from fans around the globe?

Jan Kruitwagen: Thanks, reactions and sales are insane. It takes some getting used to for us. We were with Folter Records for 16 years. A very dedicated black metal label, great bands and I always felt well at home on the Folter roster. Once we got a call from Hammerheart things went really fast. In all major record stores Sammath has CDs for sale, we got interviews in almost all the big magazines, and 150 or so great reviews. So from being a relative small underground band we got pushed into the big world within a month. That was insane. But to be honest I’m enjoying every fukking second of it. Haha. The sheer brutality of the CD leaves a lot of people gasping for air. And lots of people hate it as well, that’s always healthy. The band will always remain a small band, which is good, we create black metal, and refuse to be part of the crowd, I will never look or dress up like the bigger bands do, it’s just not my thing. They look like clowns, I hate clowns.

Sammath started out their journey back in 1994. I learnt you were deeply inspired by some early works by Gehenna, Satyricon and Teutonic thrash metal bands. So, what else have inspired you to start the band? The musical vibe of the aforementioned bands or your personal carve for creating something new?

Jan Kruitwagen: All the above really. I had been listening to metal since 85. I was 12 when Master of Puppets was released and since that time it was always metal. I ended up lending a guitar from my high school in Australia and spend a lot of time destroying that fender guitar at home, driving my parents and neighbors mad. What I always missed was darkness in music. When black metal appeared I was instantly hooked. I was always a happy kid, and still am. I can’t stand the depressed, society hates me, people who think that metal is some kind of hiding place to not be part of the rest of the world, stop being a bitch! Man up, everyone has to work to provide for family, kids. Life is good. If you don’t like it here then find a tree, take some rope and fuck off.

As a black metal band, what is the ideology of Sammath and what do you want to preach through its music?

Jan Kruitwagen: We don’t preach anything, except for arrogance! I can’t stand any form of religion. I believe black metal stands for total arrogance, fukk everyone, fuck their opinions and simply do what you want to do. I describe the world as it is, there is enough blood, hatred and stupidity to last a lifetime in the world today, and tomorrow. So it has always been, mankind is a crazy fucked up creature that destroys almost everything. I really feel free, I simply don’t care what others think, and never have, my father and grandfather were like that as well. Good folks, but don’t get in our way, and never tell us what you think we should do.

Sammath, as a band, have always been discrepant in their musical composition. The First two album were rawer black metal, whereas the third album Dodengang had taken more atmospheric regime. The 4th one Triumph in Hatred has some thrash influence/elements and the latest work Godless Arrogance is a furious black/war metal. Can you tell the reason for showing such diversity in the studio releases?

Jan Kruitwagen: Good question, I think it because deep down I’m simply a metalhead. I listen to Bolt Thrower as much as Blasphemy or DRI, or Dawn, Setherial and the three bands I listen to most would be Sadistik Exekution, Summoning and Revenge. All those bands are pretty diverse in style. I grew up with thrash and death metal, and raw rock and roll from the early eighties in Australia. I never think before I record that an album must sound like this or that. I simply write music and after some months I sense in which direction it is going, then I try to find lyrics fitting this. I listen to Kreator ‘Endless Pain’ and 5 minutes later Blasphemy, Portal or Mortal Sin, if it’s loud it’s good.

Jan Kruitwagen: I can’t tell really, who knows what I will do next. I have been thinking about writing lyrics based around a single historical figure, but that’s also been done before. Not that I really give a shit. Almost anything has been done before, my goal is not to be original, but to be nasty, and to create total hatred as music. This album just screamed hate and war from day one.

Can you tell our readers about Sammath’s line-up? And during recording, does the music composition remain a band effort? Or you compose all of the music as the bands front man?

Jan Kruitwagen: I create all the music and lyrics, up unto this album. For the first time Ruud (bass player) played a role in the lyrics and the arrangements. This worked out extremely well. If not for his input the result would have been too chaotic. Our drummer Koos is a total idiot who knows fuck all about metal and only listens to Deicide. The bass player Ruud has great knowledge of metal, he used to work at a metalstore, that’s where I met him in 2000. The music will always be written by me, period. Everyone knows that. 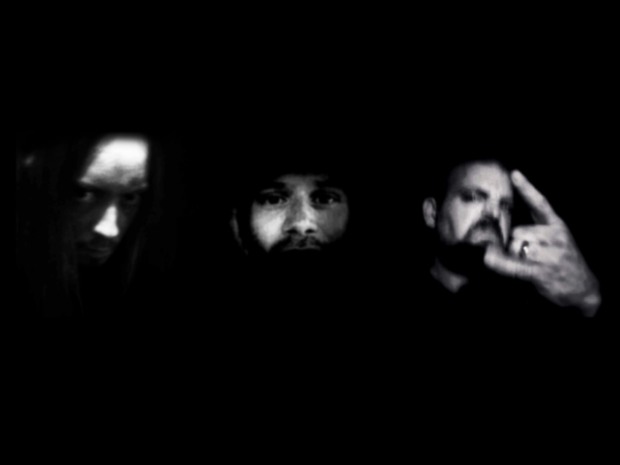 You live in Germany, and two of your other band mates in Netherlands! Have this issue ever caused any problems (communication/management/practicing) between you guys?

Jan Kruitwagen: It’s even worse than that….. The drummer now live in Belgium, I live in Germany and the bass player in The Netherlands, and now we have a new 2nd guitar player who lives in Berlin. So we can practice once every month as a band, then we practice for a two days session and the rest of the month everyone does their thing at home. I’m lucky enough to have my own studio, so I can practice whenever I want. It’s still crap though, we could have been hitting the stage years ago if we all lived closer together.

As far as I am concerned, Sammath have not performed live gigs that often. So is there any reason for you not performing live frequently? And how do you take live gigs personally? 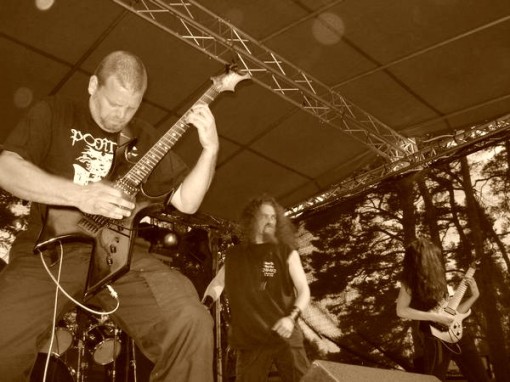 Jan Kruitwagen: I never really liked performing live, until now. Now that I do the guitar and vocals I feel a lot better on stage, only the guitar was not for me. Our old singer lost the lyrics a lot and never really had the right feeling for black metal. Great guy but not for Sammath. Koos, Ruud and I simply work best, and b on lead is a great musician who needs not a lot of practice.

You perform all the vocals on studio records, but in live gigs, a guest vocal is on charge. What may be the reason for that?

Jan Kruitwagen: not anymore, now it’s me on vocals and rhythm guitar, and the crazy Mexican does all the solos. I’m not Chuck from Death, I’m not a gifted musician at all, so I’m glad all I have to do is play rhythm. No Sammath finally sounds exactly like cd on live. Very proud that I can finally pull it off. When we go on tour next year it will be a slaughter for all of us, we give 110% or nothing.

Personal topic, you recently started working with Hammerheart Records, which was closed back in 2006 and reopened few years back. HHR is quite a big label for black metal, as they released some of the classics by Primordial, Emperor, Dimmu Borgir, Aura Noir and such. So how do you find it working with such a label? Do the record labels at this level have any policies on selecting bands or just the music? I mean, in most cases big labels tend not to select bands from diverse/obscure region.

Jan Kruitwagen: Hammerheart never really stopped, but just didn’t release new stuff. I got a call by label boss Guido asking me if Sammath was interested in releasing on Hammerheart, well that took about 2 seconds to decide, haha. After three months, and after the Sammath release he asked me if I would like to work, doing promotion for Hammerheart, again, 2 seconds. I don’t have any knowledge of what goes on inside Guidos head what bands are concerned, he knows everything and everyone. Any bands that play in, fuck knows where he would have heard about. He signs bands that he likes, period. Obscure, underground (I mean, he signed Sammath…) it just needs to be good in his view, and he knows….

At this level bands do have to have something special, and be able to sell. It’s as simple as that. You can’t expect a label like Hammerheart to invest thousands in a band who only wants to remain underground. The label has a unique history and place in metal, and I’m fucking proud to be part of that.

Sammath will be releasing a new split with Spanish black metal band Muert. This is also going to be the first ever split in Samamth’s 20 years of existence. So what made you thinking of releasing a split now? Apart from this split, will there be any new materials from Sammath in next year?

Jan Kruitwagen: I met some guys from Muert at the Nuclear War Now! fest in Berlin some years ago and we have regular contact via Facebook. The split should be a filthy piece of art. They sound like a slow version of Blasphemy, great stuff. We will also be releasing a split with Dutch band Gheestenland. Also many tape rereleases of older albums. Other than that I think we shall have a new album done by the end of next year. New songs and ideas always pop up in my head.

Inform our readers about some young promising bands you have appreciated recently.

Jan Kruitwagen: These are not all new bands, but bands who deserve it to be better known. Sacrarium, Kjeld, Tarnkappe, Ibex Angel Order, Wederganger, I think the Dutch scene has lots of promising bands at this moment. I don’t have much contact with anyone in today’s scene,

We really like to thank you for the interview, brother. Any final words?

Jan Kruitwagen: Thanks to you as well! Support your local record dealer! Hate religion! Follow your own path. Remember, nobody gives a shit about your problems, thrive in arrogance!

One thought on “Interview: Jan Kruitwagen of Sammath”