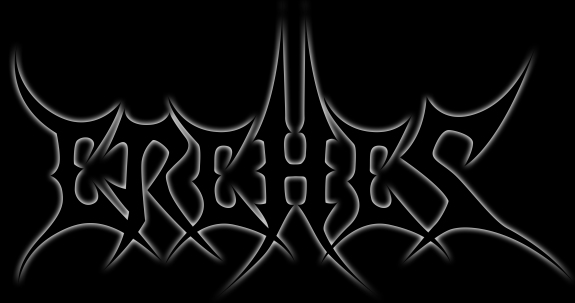 Asmodeus: How did Erehes get started?

Hellcommandar: Erehes started in the Midst of 2005, as 40DIAZ (Quarenta Diaz) the band original lineup was composed by my college comrades Binggoy (valac) Mon (moon) and yours truly (hellkommander), the band started black metal  in a small town of Cebu City, Played some Behemoth Cover songs and few reditions of Black Sabbath Covers (Black Metal Sabbath) to begin with. The band has few original compositions during those blasphemous years like; Archdiocese of Madness, the Scorn ov thy Beloved. Due to to unforeseen events other members had left and the band stuggled and continue to find replacements that would fit the band wagon.  Through the years of unstable lineup the band decided to cool down and spend time focusing on its personal agendas. a year later i met  this two cool guys Myk and Mertz  and invite them to join the band. These two guys had no background of Black Metal, but i find them brilliant they were able to capture the bands ideas. So, EREHES was formed with new concept, crazy ideas etc and tend to make its music more mature, evil and 666 X aggressive compare to Quarenta Diaz. The band made its 1st debut on Impiety Tour Cebu leg, showing a different blend of BM sound. Today, EREHES continues uphold its uprising against the norms and virtues of Roman Catholic Church and other false religion. The band now celebrates its 9 years strong and counting looking forward to meet and shared stage with true metal heads all over the country.

Asmodeus: What does ‘Erehes’ mean?

Hellcommandar: It’s someone who subversive, Againts religion particularly the doctrines of the roman catholic church. 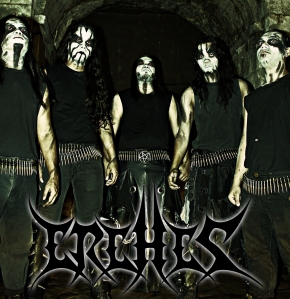 Asmodeus: Erehes is performing this year at Manila Execration Ritual. Tell us something about that. Your plans, feelings and expectations.

Hellcommandar: First and formost it’s a great honor for the band performing into a pure black metal show. Knowing some of the bands that we had shared stage before were great bands for us its more than enough total bombardment and sick experience.  And I have known Ashir of INFERNAL  EXECRATOR few month ago, very humble, down to earth guy it’s always a pleasure meeting and pefroming with the true legions. We have no expectations except to play and enjoy the set.

Asmodeus: Tell us about your latest release. The EP titled ‘Proclamation Ov the Horned God’.

Hellcommandar: The EP was like 3 years in the making recorded last 2010 at backyard recording studio in Cebu and was complete early 2013 due to lineup change and personal agenda’s it took time for us to complete everything. but it’s worth to wait, uhhmm, it’s close to 20-30mins album with 5 Unholy merciless tracks bombard with some epic guitar riffs and ravaging solo’s. 2 tracks were taken from our old band’s composition but we had to do some changes and etc. supposedly the band’s target was a full length however due to time constraint we decided to cut it short and will be releasing full soon. , also it is release and marketed by our label Crysella Records until now we are waiting for physical copies to be distributed in the country. the artwork were conceptualize by Sir PJ Ong (Inodoro Designs) a well known diverse graphic artist the the country who wanted to make some expirement by making the art more simple yet diabolical inside. And he was able to capture the bands black heart.

Asmodeus: What are your plans regarding the future releases and upcoming gigs?

Hellcommandar: We lookforward for more out of town shows, ofcourse playing outside your own arena is way more better specially you see real people appreciated and love what you are doing. With no biases. I say, there are more fulfillments performing into a much more intellectual crowd. True extreme followers do not commemorate thy one selves yet support with no exceptions. in regards to release we continue to write new songs well infact we have one added which i find it more aggressive and evil. For upcoming gigs; will save the last for Cebu hordes since we have difficulties in organizing due few venues that supports extreme music which is ironic. but more tours planned after luzon, we lookforward to desekrate Davao and some other parts in Mindanao, Visayas we lookforward to get some support aswell. So continue to stay tune! 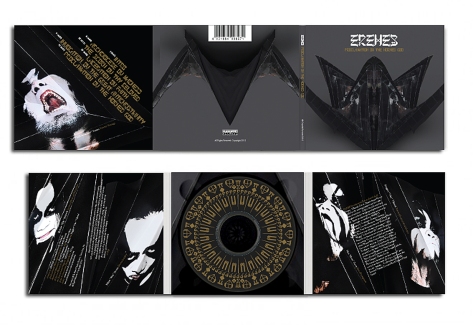 Asmodeus: From the lyrical point of view, what message does Erehes try to forward to the listeners?

Hellcommandar: Very simple, follow what you believe into and do not be decieve by what others want you to do. But to sum up everything EREHES wish everyone to be more opend minded and intellectual human being, born in a christian nation we live by their norms and much lies and hypocrisy in values they taught .so, strip the blindfolds and see the bigger picture. Realities lie into our own hands!

Asmodeus: Are there any other bands or projects that you are associated with?

Asmodeus: How would you like to explain your sound? Which bands worked as the influence or have played a major role to create the authenticity of the sound of Erehes?

Hellcommandar: I say, not the typical BLACK METAL. Most Black Metal in the country were adapting to RAW and DIY. I have so much respect for each individual’s point of views, we may like it or may not but most important thing we create something which it’s natural in a sense. if you notice Myk has deep influence in Classical Metal and our drummer does not came from extreme band which is bit challenging the Rest were influence Black Metal and Death. The band wants something friendly to the audience yet diabolical in a sense. So, expect brainstorm on every tracks. But the band that influence us most when it comes to Ideas and Philosophy is Nergal and BEHEMOTH.

Asmodeus: Thanks for your time. Any last message for the readers?

Hellcommandar: To all followers, Die Hard legions, we urge you to support EREHES as we perform together with Manila’s one of great BM Bands and Davao’s Black horde We wish to see everyone enjoys everyones set and get drunk as fvk!!!! After Manila ritual on the 2nd, we also ask everyone in Olongapo for the Aural Massacre 9 year aniversary on 3rd of May to join us and support the band. ! We want to desekrate in 2 cities!!!! 666 Support!  Ave! Cheers!